Konya is regarded as “The Granary of Türkiye” thanks to its wide plain areas, suitable climate and strategic location. Production and easy access of raw materials that are used in food industry also contributes to Konya in becoming a prominent food industry producer in Türkiye. In 2016;

Konya was the leader producer of:

and Konya was also a top player in the production of:

In sugar industry, Konya holds 35% of overall sugar production of Türkiye with 4 sugar factories. With 250 tons of daily capacity, it is also an important place in pasta production. As for salt, Konya supplies 65% of the salt of Türkiye from the Salt Lake with 20% exportation rate. 20% of the overall egg production of Türkiye is implemented in Konya as well.

In Konya, there are more than 650 firms carrying out their production activities in the food sector and about 15.000 people are employed in these firms. Of which, flour production industry has 102 firms and have about %10 share in Turkish market. For confectionery, there are nearly 100 firms in Konya performing confectionery and chocolate production. 70% of the sector firms carry out their production activities for the domestic market while the rest 30% works for exportation.

Executive Summary on Food and Agriculture Exports from TR52.
VIEW 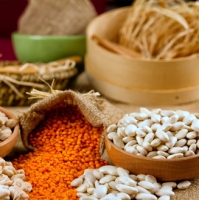 All kinds of information and documents published on this site have been provided by Mevlana Development Agency. All rights reserved. © 2022 Web Design